Find out how Go Wild sessions have benefitted young people. 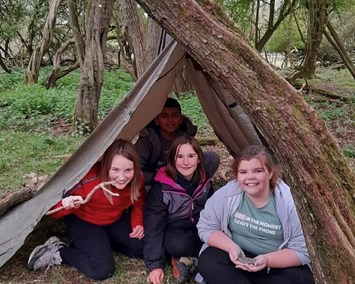 The case studies featured here demonstrate how participation in the Go Wild at Hudnall project can improve children and young people's emotional wellbeing, self-confidence, engagement, social skills and connection to nature. The case studies were written by an external evaluator as part of an assessment of the impact that the Go Wild at Hudnall project has on young people.

A young person attended Go Wild at Hudnall who is very academically focused and strives for perfection, struggling if they get anything wrong. The young person started the session by trying to do everything perfectly on their own, without help and soon became frustrated when they couldn’t complete the activity alone. They also avoided any activities which involved becoming muddy or messy. Go Wild at Hudnall gave them the freedom to do things differently. By the end of the session, they were planning adventures, tree-climbing and had the confidence to talk to young people of different genders, which they had never done before. They were like a different young person altogether. The experience gave them the confidence to become a bit freer and not to feel that they needed to conform to their ideas of being a ‘perfect student’ all the time

A primary school participant with attention deficit hyperactivity disorder (ADHD) and behavioural issues at school attended a Go Wild session at Hudnall and the teaching staff noted that their level of engagement was unprecedented.

"When they were here, they were very engaged with everything and loved it all. When we went pond dipping, they were just so excited. They had never thought about what they could do for a job in the future and they couldn’t see the point of school. I told them that there are people (called zoologists) whose job it is to look for frogs and newts and they were thrilled. Every week after that, they would ask me to remind them of what they were going to be when they grew up..."

School staff were concerned about a young person, who was new to the school, with English as an additional language. The young person had been struggling both academically and socially. The Go Wild at Hudnall sessions were of benefit to them, as they were able to form friendships at their own pace. At school, they had felt like an outsider because friendship groups had already been established when they arrived. At Hudnall Park however, they made friends through the activities and their confidence really improved.

Exploring in a judgement-free environment

A young person presented with very challenging behaviour and often gave the impression of not caring very much about anything. Go Wild at Hudnall has helped them to relax and engage with activities, whilst being less concerned and focused on what the other young people might be thinking about them. The school has seen such a difference in their behaviour. Consequently, the school are making enquiries about the possibility of bringing other young people to Go Wild at Hudnall and enabling the young person to lead a group of their peers.