More than 60 young people from across Hertfordshire were recognised for their outstanding achievements at Hertfordshire County Council’s YCH Services for Young People Awards, which were held virtually this year.

The event took place during National Youth Work Week and highlighted the impact that Youth Workers and Personal Advisers have on helping young people overcome barriers and fulfil their potential, particularly during this challenging year. 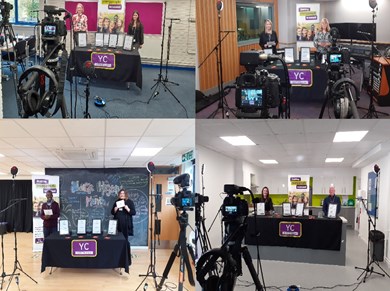 Praising the young award-winners during the virtual ceremony, Deputy Leader of Hertfordshire County Council and Cabinet Member for Children, Young People and Families, Councillor Teresa Heritage said: “I am always impressed with how much resilience young people show but this year, more than ever, they have demonstrated remarkable perseverance and have adapted to difficult changes.”

Young people were nominated by their peers and their workers. This year’s winners included:

A 14-year-old who was referred to a YCH project as he was at risk of becoming involved with anti-social behaviour. He was able to reflect on his past decisions and consider the positive choices he would make moving forward and became very passionate about the subjects discussed during the programme. He attended other projects with the Service including completing an emotional wellbeing programme.

A 19-year-old who demonstrated her determination to build her skills in one of the young parent’s projects. She is enhancing her confidence and has developed positive friendships within the group. She is very proactive in the care of her child whilst also building on her own overall wellbeing.

A 13-year-old who was struggling with low self-esteem and confidence having spent years as a child in Great Ormond Street Hospital. Her organisational skills made sure everyone had a role to play in the social action programmes.  Her confidence began to soar, and it is fantastic to see how she has blossomed into such a focused, considerate, caring and very ambitious person.

An 18-year-old who lacked the confidence and motivation to go to college after Year 11, having missed a lot of his last year at school and he was unsure about his next steps. After attending a Positive Pathways programme was offered employment at a golf club where he had successfully completed his work experience, with the possibility of this leading to an apprenticeship.

Through involvement in one of the transgender youth projects a 17-year-old grew in confidence significantly and now wants to take on responsibilities within the project.  They have taken on a mentoring role with other young people, often supporting new attendees and helping them settle into the group.  Overall, they are an incredible young person who has made a lot of progress over the time they have been attending the project.

Feedback from young people and parents:

“I’ve been accessing YCH Services for Young People since 2017.  At first this was very difficult as I didn’t know any young people in my area, due to recently being placed into foster care.  The staff gave me so much encouragement and support that I gained skills I didn’t have before. It helped my confidence and self-esteem and allowed me to grow as an individual, achieving my ongoing goals.”

“I would like to take this opportunity to thank you for what you do for young people, and especially for helping my daughter. She has benefitted so much from the workshops. While it reinforced a lot of what I had discussed with her in the past, it has also taught her things I couldn’t have done. It has opened her eyes and made her more alert to dangers and how to avoid getting into friendships or situations that may be harmful, dangerous or even illegal due to naivety.”

A head teacher from a school said: “Thanks so much for all your work in this crazy term... I hope you know how much of a difference you have made for our pupils; I probably don't tell you enough how highly I know they regard you and value your advice.  The school is so much stronger thanks to your involvement.”

More than 60 young people from across Hertfordshire were recognised for their outstanding achievements at Hertfordshire County Council’s YCH Services for Young People Awards, which were held virtually this year.