Young people learn how to stay safe with Positive Alternatives 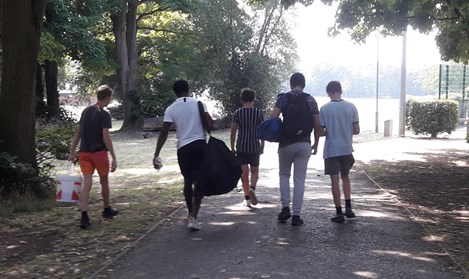 The two-week programme for 12 to 17-year-olds took place in every district and borough in Hertfordshire during the school summer holidays. Small, socially distanced groups of young people took part in a mixture of sports activities as well as discussions on key issues affecting them including drugs, relationships and staying safe.

The programme was funded and delivered by Hertfordshire County Council, with input from Hertfordshire Constabulary. Young people reflected on the reasons why they and others might be tempted to join a gang. During the sessions the young people grew in confidence, so they felt equipped to challenge peers in order not to feel pressured into committing crime and anti-social behaviour.  They demonstrated how their knowledge of how to protect themselves had improved and now know what support is available to them.

Young people who attended the programme in Borehamwood were lucky enough to have a video call with professional boxer Anthony Joshua. The young people were able to ask him any questions they had, having taken part in some boxing coaching as part of the project.

The programmes took place in young people’s centres, local schools and other outdoor spaces across Hertfordshire. Workshops included identifying stereotypes as well as hard-hitting sessions on the impact and damage knife wounds cause. There were also sessions which focused on employability, sexual health and relationships. These were mixed with activities such as obstacle courses, photo scavenger hunts, decorating face masks and daily sports sessions.

The Deputy Leader of Hertfordshire County Council and Cabinet Member for Children, Young People and Families, Councillor Teresa Heritage, said: “It is great to see so many young people benefitting from the Positive Alternatives programme this summer. In addition to the healthy activities to take part in, the workshops have had a real impact on the young people and will help them and their friends take the right steps towards a brighter future.”

Young people who took part in the programme said:

“I’ve met new friends and learned some really important stuff. I know I can come to YC Hertfordshire for support in the future and trust them”.

“It’s nice to see and talk to people and learn some valuable life lessons.”

“It has made me more talkative, more active; I’ve learnt about violence and territory, gang recruitment and drug dealing.”

“Positive Alternatives is useful because it gives you advice about drugs and violence.”

“I feel a lot more in control of my life and able to see the wrong in people’s behaviour and not make the same bad decisions I see my friends have made.”

“I know how to create a support network and who to speak to when I’m feeling pressured by my friends.”

A parent of a young person who completed the programme said: ‘’I would like to take this opportunity to thank you for what you do for young people, and especially for helping my daughter these past two weeks. She has benefitted so much from the workshops. While it reinforced a lot of what I had discussed with her in the past, it has also taught her things I couldn’t have done. It has opened her eyes and made her more alert to dangers and how to avoid getting into friendships or situations that may be harmful, dangerous or even illegal due to naivety’’