Young people in the projects run by Hertfordshire County Council Services for Young People were supported to understand and connect with others across cultures during this year’s Black History Month.

The Stand-Up Project in Watford is for young people from Black, Asian and Minority Ethnic (BAME) backgrounds and amongst other opportunities provides a place to explore identity, celebrate culture and diversity and discuss issues around racism and discrimination. Throughout Black History Month the project has incorporated the celebration of food and cooking from a range of cultures as well as discussing what diversity means to young people. 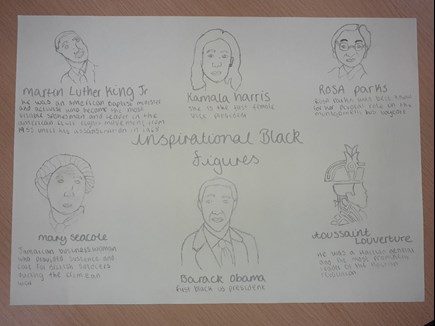 At youth projects in Three Rivers, young people discussed hate crime and racism amongst different communities. Young people spent time looking at BAME role models and the importance of breaking cultural stereotypes. Youth Workers delivered a variety of activities to support the learning.  Sessions included looking at mental health advocates and their stories within the Black community, and exploring music, culture and lyrics.

In a youth project in Potters Bar, young people were inspired to interview each other and ask the question ‘what it’s like as a young black person in today’s world’. These moving and honest interviews were captured by the Youth Workers with the hope to share with other young people.

Young people from the Hertsmere NHS Cadet programme researched black influential women within the history of the NHS. Meanwhile, in East Herts those who attended the Girls and Young Women’s Project discussed black female role models, their achievements and impact that they had. This has led to the young people exploring their own ambitions, qualities and aspirations for the future.

A youth project in Hatfield has been exploring famous Black musicians, with the young people contributing to a playlist throughout the month featuring iconic musical legends and discussing the influence that these artists have had on music over the decades.

In Stevenage and North Herts, the Youth Council explored the Black Ethnic Minority Empowerment (BeMe) community group, researching the work of its local founder, Gertrude Acheampong. The Youth Council has also spent time preparing questions for her such as what does local activism look like? how can we play our part in supporting the BAME community? and, what is the impact of her work, particularly for the local black community?

The Youth Council also got involved in a ‘Civil Rights Fist’ activity, drawing around their own fists and writing a pledge inside to promote understanding activism against inequality. These pledges were then uploaded to their social media accounts.

LGBT+ projects in North Herts familiarised themselves with Stonewall’s campaign to encourage the LGBT+ community to be better allies to the BAME LGBT+ community and how to support each other through ‘allyship’. The group created posters to reinforce the messages and learnings of the campaign and used Stonewall’s resources to learn about and discuss topics such as BAME LGBT+ visibility and representation. Some of the Identity sessions introduced spoken word poems from BAME LGBT+ authors, providing an insight into community members’ experiences in different parts of the UK.

At Hemel Hempstead and Bennetts End Young People’s Centres, an ongoing activity throughout the month was called “I have a dream” and young people considered the dreams that Martin Luther King shared with his followers and the world. The young people were then asked - If you could change the world in what we live in what would your hopes and dreams be for the future?  Young people wrote their ideas on a cloud and were displayed throughout the month.

Young people said about what they learned:

“It was good talking about Black History Month as we rarely stop to think about culture and the struggles some communities go through. I enjoyed researching different black historical figures.”

“It was really interesting finding out about LGBT+ black icons and how they changed history.”

“Inspirational quotes for everyone to see helped to keep BHM in the spotlight.”

“I really enjoyed learning about famous black people in the health sector and their contribution to health care.”

Find out more about our projects and programmes.